Last weekend the JK was held in the Perthshire Region in Scotland.
A number of CNOC runners were making the trip over and we even had the support of one of Conor's Swedish friends to fill up the relay teams!

The event started on Friday afternoon with a Sprint in Livinston. The morning was spent looking for food in the nearby, absultely massive, shopping centre. Speculation as to whether Seamus had travelled or not was the topic of the day and his eventual arrival prompted many attempts to damage Colm's psyche. We all jogged up to the start and prepared for the race. I was out in front of Seamus by 2 minutes and Chris Smithard (Bristish Sprint champion of two weeks ago) was 1 minute behind me. I went out HARD


which was foolish and had a hesitation on #1 dropping about 5seconds. Pulled it together then and was clean for 2,3,4 but missed the proper route choice to 5 dropping more seconds. Then on #7, I got to it just behind Mike Long but he allowed me punch it before him. Smithard eventually cuaght me at 12 and I only stayed with him until 13 when he took off up the hill. The rest of the course went fine except for how exceptionally tired I felt near the end and I tailed off in the hilly park area at the end. The results then made interesting viewing. Colm was first of the Irish coming in 13th place and Shea was a minute behind him. Then I came in 40seconds down on Shea with the rest of the Irish present in a 4 second window behind me! Good start to the weekend, CNOC dominating the Irish.


In the Womens Elite Sprint, Niamh showed the rest of the O'Boyle clan how its meant to be done finishing 9th, 7seconds to 6th!
Full results from Sprint
A head cam from the Mens Elite Sprint race

The middle was another story. We arrived at the assembly to realise it was going to be an uphill slogfest at the end of the course with the route to the start being entirely downhill! I went out trying to take it easier today but missed #1 (although I have yet to talk to anyone who actually got it...) [What Ruairi is trying to say in a PC way was that the map was wrong] after going through the dodgy vegetation. Headed off to #2 and veered slighly left only to meet Gerard who had started 6 mins in front of me! Then things sped up a little. On the way to #4 the two of us stopped as we were confronted with an unmapped wall of green but we didn't lose as much time as most. The veg continued to be odd all the way to 8 where we saw Colm, who went out 4min in front of me, leaving the control. Ger took off after him leaving me struggling. As I saw them disappear in the the marshy distance I lost the power in my legs and made a complete haimes of 11 dropping 1:30 and any chance of seeing them again was out the window. Managed to get my legs to work (just about) for the last part of the course but Kris Jones was still able to fly past me up the huge hill at the end. Less good performance from CNOC today with Marcus and Darren showing us how it's done. Conor showed that Sweden is having some good effects being the third Irish on the day and ahead of myself, Colm, Shea and Hugh who didnt have great days. On other courses, Ruth was disappointed to only be sitting in 4th (+2:12) place on her course and Niamh was showing that she is on her way back on W21E. Regina on W21L was happy with her race and was looking forward to Craig a Barns with the rest of us.
Full results here
A blank map from the Mens Elite course and Womens Elite course.


Day 3 was the much anticipated Long Distance on Craig aBarns. Its also a famous place for Rock Climbing as can be seen here. There are over 70 climbs and lines in the area.


After a pretty monster climb to get to the start for the Long distance where I watched Shea and Colm go out with their 9 and 3 minute gaps on me respectively. I went out easy as I knew it would be long. Kept it tight at the start until #6 where I suddenly saw Colm running back up the hill. I had a rush of blood and pegged it down where he was coming from, I very quickly called myself an idiot, having known the control was above me the entire time. Hit it just behind Colm and he put the foot down to get away from me. I kept going at my pace yet both of us messed up #7 by about a minute. Colm was looking tired so I kept plugging away and got to #8 just ahead of him, decided I had the beating of him so I dropped him (he'll tell you he was tired and made a bad route choice, but I'm sure that's lies...) Kept up the standard pace and caught Shea as he wandered around some green areas in the North of the map. He followed me into the control and then helped me find the next one... I then started to take strips of him on the hill out the the valley. Never saw him again and was by myself until the damn steep climb on the long leg. Caught another guy and then felt some punishment for the last few controls. Got away from him near the end and came in happy. Pulled off 21st on the day and overall, second of the Irish behind on Marcus in 15th. Colm and Shea had disasters lacking in energy and tehnical skills, but much banter over the last few controls on how delicious a kendal mint cake would be, before Shea took advantage of Colm cramping and ran sprinted off. Hugh didn't show his Swedish skills having gone down with a bad ankle. Conor did well on M20E with a top ten finish, getting lucky as Anton smashed his compass. It was a perfect set up for some fantastic racing the next day. Ruth finished 5th on the day but stayed in 4th overall and was very disappointed. Bernie O'Boyle was 7th on W50S with daughter Niamh once again having a solid race to finish in 17th but claims to need more training.
Results here. Seamus's map here. His main comment post race was something a long the lines of "feed me" and "my legs".

The last day was the relay on Newtye Hill. Hill was an understatement.

The mass start went straight into a huge climb to the first as Conor and his Swedish buddy, Anton, were fighting it out for glory. At the end we saw them coming with Anton absolutely hammering it and Conor only seconds behind. Neither looked too healthy when they crossed the line. The came in close together to set up another ego fight of Shea vs. Colm. There could only be one winner of the day as Colm came in nearly 3 mins ahead after Shea missed the central butterfly control one of the times he went through it. Both claimed to have the longer gaffle at every opportunity. Anything to not lose face.
I set off up the hill with tired legs with no fear of being caught. Saw Hector Haines and Kris Jones fighting out for second and it was nice to be out at the same time as them instead of waiting for the mini mass start. I was suffering badly on the hills and was crossing the wall on the long leg to 11 when I noticed Hugh was on me. He had hammered the start of the course. This didnt look good. I tried to hold him off but he was running strong. He hit 11 just before me and stopped dead... "S!#t" he says. I felt momentary joy until I read my descriptions which also suggested I was at the wrong control... Checked again but was right, punched and caned it down the hill while he was left to find himself. Never saw him again but leaving the quarry of 14 I saw Marcus coming up the hill. This was worse. The climb was pretty much over I told myself (what a lie!) and tried to pick up the pace.


Put a small bit of time into Marcus on the steep downhill into the spectator but missed 17 by a meter, saw a yellow and blue top coming over the rock and thought it was Marcus, but it was only Matthew Speake. I tried to hang onto him for dear life, which was fine until I got to the actual last climb. I was dying but there was no sign of Marcus yet so I just tried to keep moving, only to discover I was missing the second last, recovered with only about 2seconds lost but then I saw him. He had had the shorter gaffle so I ran to ger to the path about a meter in front of him. From then on it was all pain. Ran down the hill to the last, hear shouts for my name intensify as cheers for Marcus joined them. I felt panic when I hit the tiny tiny incline on the run-in as I had nothing left but Colm was going crazy so I decided to put some randomer between me and Marcus to make it harder for him to pass me... [Editors note: The lunge was pretty dam impressive] Turns out he was on our course so I finished the team in 12th...
Best CNOC result in a long time that we know about and we were happy. Hugh had a pretty bad end to his course it turns out. The CNOC ladies came 4th on the women's short after Niamh and Caoimhe had blistering runs and Ruth couldn't quite live up to the standard... Overall a good weekend for most

Full Results
Hero head cam of Mens First Leg
Colms map from Leg 2 (note the climb back up from 11 to 10. Shea had to run that...twice!)
Posted by Colm O'Cnoic at 4:11 PM No comments:

With a lot of CNOC runners still in Scotland training, I will only give a quick team update.

Niamh, Caoimhe and Ruth had monster runs in the Womens relay and finished 4th.
Results 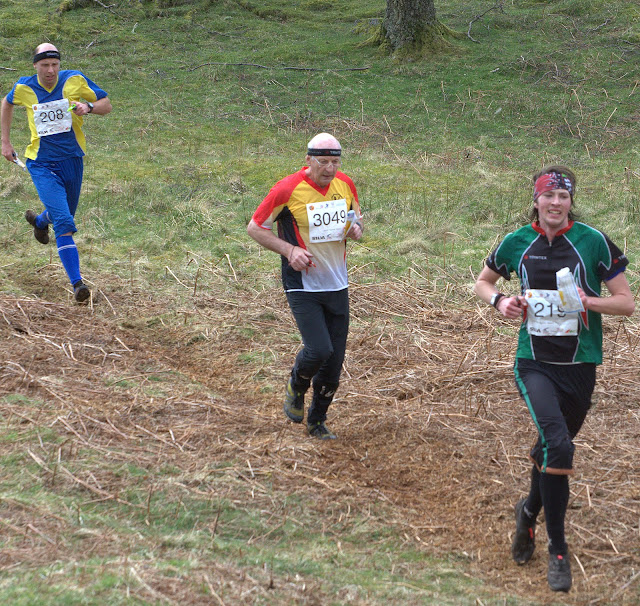 Full report to follow
Posted by Colm O'Cnoic at 11:29 PM No comments:

Dysart was the location for 5th race in the Leinster League Series 2012.
The excitement of a new map brought people down from Dublin and even up from Cork.

123 runners grace the results list which can be found here.
Routegadget and winsplits are also available.

The league results can be found here with 5 out of 6 events completed.

A big thank you goes to all those that helped out on the day and before and after!
From kits to si to entries to mapping and everything in between.
Posted by Colm O'Cnoic at 4:27 PM No comments: