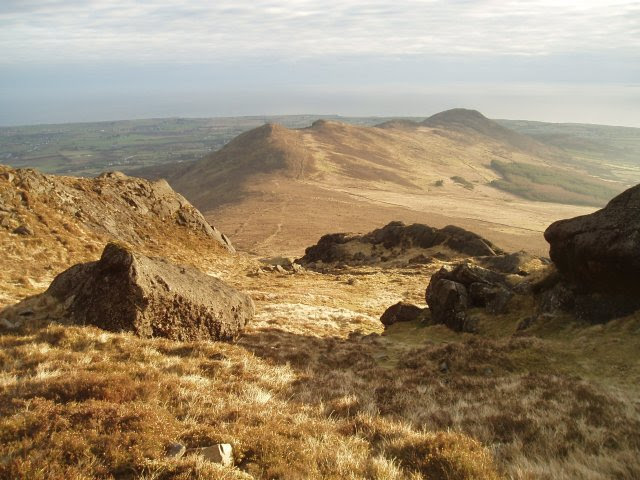 This weekend was all action for CNOC once again.
We had a few members over in Sweden training up their technical abilities over the midterm break. At the moment Ruairi and Regina are orienteering away. Haven't heard any details. Hope they aren't too lost! Nearer to home, Conor Short and Colm Hill pitted themselves against the best XC runners in the country in the National Championships. Both agreed that it was a bit flat, but still both were the vital 4th scorers on the Donore teams in Junior and Senior level.
Sunday morning brought a clear day on Slieve Foye. The venue for the second Long Distance race and it was anything but flat.
CNOC had a good turn out with 8 runners across the 3 courses. Conor, Colm and Ruth tested themselves on the Long Course, it measured 14km with 785m of climb. Colm somehow clocked +900m of climb on route to taking his second win. Gerard Butler of 3rock claimed 2nd with Conor a few mins adrift. Both admitting to been in slight discomfort from the previous day.
On the Short and Medium we had Mitch, Bernie, Senan, Bridget and Tony.
The views from the top were meant to be spectacular, Carlingford village could be seen nestled on the edge of a crystal clear Carlingford lough, with the Mournes on the horizon. Stunning. If only there was time to stop at the top for a cup of tea.
Full results and photos aren't up yet but all runners will have a chance to run a third Long Distance event on Slieve Martain(?) and Meelmore in the coming weeks.
The series is becoming very popular. Full credit to High Performance Director Ivan Millar (and his family!) for putting on two great events so far.
Posted by Colm O'Cnoic at 9:10 PM