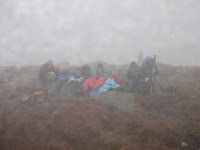 CNOC members got the new year off to a start by welcoming the dawn on Toin le Gaoth.
Unfortunatly there was a heavy mist and no sun. But there was lots of Rashers and Sausages after and plans made for the coming year by our elite runners so watch this space as they take on Europe and the world (Ireland is too small for their ambitions, egos.)

On Sunday 2nd of Jan 2011 we went to three rock to support the Irish junior squad fund raising event which had been cancelled due to heavy snow over the christmas period.
With all the new gear CNOC members were wearing at the event it looks like the enthusiasm is still strong and we have four or five new juniors between the ages of 10 and 14 so watch for them over the coming season. Flash shoes, gaitors, Fast Si cards and new tops....
Posted by CNOC Editor at 2:22 PM