Last weekend Shea and Colm ran in the Mourne Mountain Marathon bad weather and an injury put paid to the journey on the second day. They were both dissappointed in having to drop out having led their section by 27 minutes, but they live to fight another day and have learnt some valuable lessons. Check out colm blog..........

I have received a lot of photos from Ruth. I've tried to upload them but cannot find them as they are now out there in space somewhere. Hopefully they will relocate and come back to me then ill try again.

If anyone has any news or pics pass it on and we will put it up on the site.

Lost Orienteer
An orienteer was running along one day when he came to a wide river. Seeing an orienteer on the other bank, he called out "Hey, how do I get to the other side?" (he was from Dublin, and hadn't recognized the symbol). The other orienteer looked carefully along the bank to the left, then carefully along the bank to the right, thought a bit, then called back, "You are on the other side!" (I can get more)
Posted by CNOC Editor at 8:04 PM No comments:

Scotland, France, Emo and Everywhere in Between

The Junior Home International was held over the weekend of 10-12 September, based around Perth and Stirling in Scotland. On paper the Irish team looked strong and so it was proven in practice with a comfortable overall win over Wales to win the Judith Wingham trophy for the first time in many years. 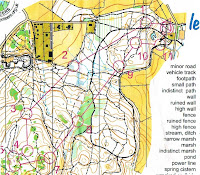 Mean while in Perth, Niamh O'Boyle was busy burning up the streets to finish in the top 10 of the Park World Tour behind the winner Helena Jansson of Sweden.

The next morning, Devilla Forest was the location for the long distance individual races. Here the forest was pretty flat with much fewer paths and subtle contour detail. The only issue here was the “white” areas were very rough with waist high heather and a network of old drains. Keeping a bearing was very difficult. The M18’s had a very long leg through the middle of the map and several of the lads chose to run the path to the east (some 3 km) which turned out to be as quick. 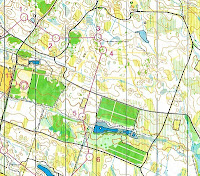 Again the performances were very good our best runner in each class were Caoimhe (7th), Niamh (Corbett)(7th), Áine (6th), Jonathan (4th), Jack (6th) and Séan (5th): strong across the board.

We ended up on 61 points well ahead of Wales 45. England, on 135 points, also had a very comfortable 16 point margin over Scotland. Full detailed results can be found here.

The entire Irish crew are shown below: 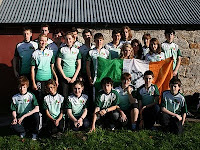 There are more reports on the event on the Irish Junior Squad page here and on the Northern Ireland OA site here. For runners routes on Routegadget in the individual race, see here. For more photos, see here.The JHI 2011 is due to be in Ireland in or around the middle of September.
Closer to home, CNOC held a "Non League" (the new fancy term) event in Emo Court. The race was planned by Colm Hill and controlled by Pat Healy. The event had a turn out of 65, with the Long been planned as a Longish Middle Distance. The courses were enjoyed by most. However, worry spread through the car park as the first starter wasn't back 90mins later... A big thank you to all who helped out on the day. From starts, car parking, control collecting, registration and dealing with the SI.
Last weekend SET organised a Mountain Bike Orienteering event - a few nice photos are located here. Senan O'Boyle was best CNOC finisher coming in in 4th position on the Long.
Also, CNOC have a few athletes off to the Senior Home International in a few weeks.
These include, Ruairi Short, Seamus O'Boyle, Conor Short, Niall Ewen, Fiona Hill and Niamh O'Boyle (in descending order of height).
Next week CNOC have runners travelling to a Pre World Champs Training Camp 2011 and World Cup Races in the Western Alps in France. Niamh O'Boyle is heading firstly to France before continuing onto the World Cup Final in Switzerland, while Seamus, Ruairi and Colm are attending the World Cup in France before they return home for college.
I think that's all that has happened recently - if I'm leaving something out, write it up and email it on.
Posted by Colm O'Cnoic at 3:16 PM No comments: