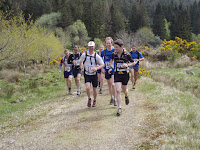 Today IMRA ran one of it Leinster Championship events in Wicklow consisting of a loop of the Glenmalure valley, taking in Clohernagh, Lugnachoille, Camenabologue, Conavalla, Lugduff, and Mullacor.

CNOC had three runners in the event, Colm Hill, Ruth Lynam and Don Short. From the start the route followed the zig zag track to Arts Lough. This track eventually became a rough firebreak. Unfortunately none of the available maps showed the end of the zig zag path accurately, therefore a very short section was marked on the ground with tape to bring runners through the correct gap in the trees to gain access to the open mountain and track to Arts Lough. Here there was an orienteering control kite fixed to the fence adjacent to the South East end of the lough. Runners had to visit and punch this control to mark their race number.

Departing the lough in a South Eastern direction they had to climb the natural ramp in the land leading up to Clohernagh. On reaching this point the Clohernagh summit was obtained due west, it was then a stamina test up along the broad ridge to the summit of Lugnaquillia.

From Lugnaquillia the runners headed north to Camenabologue.

From Camenabologue the next checkpoint was at Conavalla. A direct route offered easier navigation but a more circular route closer to Table Mountain provided easier running ground.

The next checkpoint was Lugduff summit. From Conavalla careful navigation was again required to gain the correct spur leading to the Lugduff ridge.

From Lugduff they ran southeast along the ridge towards Mullacor, the final summit of the race.

It was then a steep descent from Mullacor to the track junction in Ballinafunshoge Woods. From here there was many options to take before another orienteering control kite had to be visited and punched. Following this control, it was a break neck sprint to the finish down a series of rough switch backs.

Ruth and Don opted for an early start, unsure of how long it would take them. A group of five set off an hour in front to lay down footprints for the chasing pack. The main race started at 12:00 with the sun high in the sky. It was an ideal day to spend raceing in the mountains. From the start Colm was up towards the front as the runners made their way towards Arts Lough, the pace was an easy one with the runners chatting about the latest outdoor gossip. This climb was only the warm up. From Arts Lough the race took off with the front runners increasing the pace to split the pack, Colm was first to summit on Lug with the chasers, Peter O’Farrel and his flat mate Niall McAlinden in hot pursuit. A steep descent and clever route choice kept him in the lead for most of the run but it was Mullacor where the race was decided. Peter went straight for the safe Wicklow way route off the summit while Colm chose the obvious route on the map, straight through the fire break! It was the choice of the fire break which cost him the race as the firebreak disappeared and he had to follow the stream surrounded by green (orienteering descriptions). He emerged from the wood in second place, which he held to the finish an excellent result after 25km and 1370 metres of stamina sapping climb.
Posted by CNOC Editor at 10:14 PM