Full results are here
Thanks to all who came out for a run, and we hope to see you in Hillwood next Tuesday.
Posted by Colm O'Cnoic at 4:12 PM No comments:

Report from our event courtesy of Regina.

Last Tuesday was a lovely May evening- perfect for the first instalment of the CNOC summer evening
series at Donadea. There were four courses- Long, Medium, Short and an adventure course. Eileen
Loughman was the course planner/Controller. The courses were planned to avoid the rougher terrain
so race pace was high.

The results were quite close in the adventure courses where David Collins beat the team of Fogarty
and Noonan for first place. A similarly close result in the long course saw a minute between first and
third place. Laurence Quinn beat his fellow competitors even while sustaining a crippling foot injury
towards the very end of the course.

Ruairi Long was a clear winner in the short course four minutes. Similarly Don O’Hanlon from BOC
won in a time of 50:40 nearly 5 minutes ahead of Roisín Long (AJAX).
Results are available here
.....
Our next race is on Curragh East on Tuesday 24th.
Posted by Colm O'Cnoic at 1:01 PM No comments:

A shameless copy and paste.

Rumor has it that this years Summer Series will have a bit of spice added to it.

Did someone say vicious gaffling....

The CNOC Summer Evening Orienteering Series is back for 2011. Let’s hope the summer also returns.

The first event will be in Donadea Forest Park on the evening of Tue 17th May.
Start times 18:00 to 19:30. Courses close at 21:00 promptly.
Please let us know in advance if you are bringing a group.

SI electronic timing will be used, SI cards will be available to rent if don’t own one.

The other events in the Series are:
Tue 24 May Curragh, Sunnyhill area
Tue 31 June Hillwood, just outside Monasterevin on the Athy road
Tue 14 June Donadea
Tue 22 June Hollywood, West Wicklow, including end-of-season barbecue

This year Ajax hosted the Irish Orienteering Championships in Wicklow. This was the largest (open to correction) Irish Championships ever due to the extra numbers that stayed on after the JK last weekend.
The weekend opened with a Middle Distance race on Glendoo Ridge. The ridge line is covered in peat hags that formed the basis for the navigating. Kevin O'Boyle (M20), Caoimhe O'Boyle (W14) were our too most successful runners on the day, both claiming Irish titles. There were a number of close misses with Conor Short (M20), Deirdre Ryan (W18) and Billy O'Neil (M65) all coming in in second position. Regina Kelly (W21) came home in third. Full results from CNOC's 26 runners is here.
Day 2 of the championships brought CNOC to the well known slopes of Brockagh mountain. The slopes provided faster running than the previous day but runners had to be wary of the contour and rock detail. Many a runner was caught astray. CNOC came home with 3 Irish titles. Senan O'Boyle (M55L), daughter Caoimhe O'Boyle (W14) (again!) and Deirdre Ryan set the record straight by claiming her first national title in W18. The rest of CNOC's podium toppers were Conor Short (2nd M20), Eileen Loughman (3rd W21S), Billy O'Neil (3rd M60), Bridget Lawlor (W40). Laoise Ryan (W10) and Siobhan Delaney (W14) just missed out on the podium in 4th place. Full results can be found here.
There is loads of information about the event, with photos, routegadgets and results all on the IOC website.
Tony's photo's from the event can be found here
To keep ye amused, here is a link to my QuickRoute from the Long Distance on Sunday.
If people have photos or race reports send them on.
Posted by Colm O'Cnoic at 5:51 PM No comments: 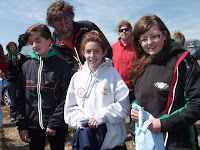 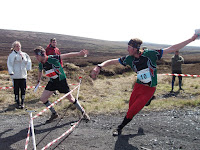 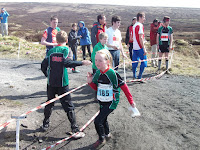 I have lots more photos when I talk to the real PRO I will put them up.
Posted by CNOC Editor at 10:07 PM No comments: